With a ‘handsome and damned’ look and an incredible talent, Jameson Burt is ready to get deeper in his dream. The recording artist’s music is filled with passion, heavy melody and raw emotion: a unique blend of alt-rock, pop, funk & soul music that adds up to something entirely beyond genre, something unclassifiable and yet familiar.

Discovered in LA by famed producer and art-rock pioneer Rupert Hine (Tina Turner, The Fixx, Stevie Nicks), Jameson signed with Auditorius/BMG/Sony in Berlin in 2014. Since then he has released 3 albums and numerous singles, and has toured extensively throughout the U.S, Europe, and the U.K. both as a solo artist and as frontman for alt rock band Mount Holly (Razor & Tie Records).

With his powerful voice and commanding stage presence, Jameson has built a loyal following in Europe as well as at home in Los Angeles & New York, and has shared the stage with acts such as Rival Sons.

Burt is now ready to show his own world in the new video for the song Deeper In The Dream ft. Malik Hutton and directed by Thy Tran (additional shots by Dallas Kruse). Starring in the video with him, Italian actress Emanuela Postacchini.

What’s the idea behind your new song Deeper In The Dream?

“When I write, I lock myself in the studio. The first thing is usually just to find a mood in the music, an emotion that impacts me first. In this song I wanted to express my idea that, no matter what you want to do in life, you need to create your own world, a place that’s your own and where you will always find yourself. For me it’s all about those nights where most people are asleep, that’s really when my creative side comes alive. This song is about that dream world for me, being out in the city when everybody else is sleeping, and it all belongs to me for that moment.”

This song is very personal to you, is there a specific line that you are particularly attached to?

“I love the lyrics of this song, and a lot it is me talking to myself. Like the line: ‘Do you think that I could really fly? Second star to the right ’til the morning’, it’s actually a Peter Pan reference. Peter Pan is a story about never letting go of the part of yourself that still knows how to dream. The whole song is a conversation with myself, it’s a constant reminder for me to hold on to that part of me no matter what.”

Would you say music is some kind of therapy for you?

“Definitely. In different stages of my life, I’ve tried to write songs to comunicate with people, then I realized I had to connect and talk to myself first.”

You were previously in a band. How are you facing the solo career now?

“I think of myself as a solo artist at the moment just because I write everything myself and I play most of the instruments. I collaborate with a few people, my main partner is Andrew Carter the coproducer of this album I’m working on. Live, I have a pretty new group, but so far it’s been very good. I am a solo artist, but I definitely have a great group of people and musicians working with me and I couldn’t do it without them.”

What are your biggest musical inspirations?

“There’s a lot! Anything from Peter Gabriel, Prince, The Police and also newer and totally different artists like Kendrick Lamar, who I love. I like to switch it up and get familiar with many musical genres.” 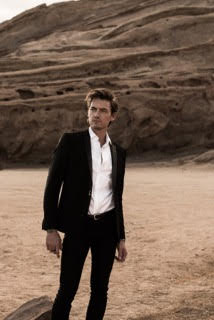 How would you describe your relationship with music?

“It’s something I get so much pleasure from creating. The creative process is something I couldn’t live without. Music has been there all my life, it’s just what I do. I can’t immagine not doing it, it’s the most important thing in my life”

What is the main message that you want to comunicate through your music?

“You know, in some of my songs there are certain shades of mystery, meaning, some lyrics that just come to me and I don’t quite understand where they come from or what’s their exact meaning. That’s the exciting part of the creative process for me. It’s like chasing an emotion and making something complete out of it, even if the message isn’t clear, for me it’s really all about communicating that emotion.”

What are your future projects?

“I’m finishing an album right now, this song is on it. The album will be coming out be the end of the year I hope and it’s going to be called Tropics. I’m also working on a cover album of female artists from the 80’s and the 90’s. I’m just starting a new project with my band, we are working with the Italian producer Saverio Principini, so we are planning more live shows and studio sessions to explore the new band’s energy.”